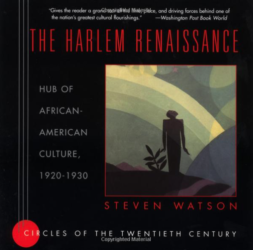 It was W.E.B. DuBois who paved the way with his essays and his magazine The Crisis, but the Harlem Renaissance was mostly a literary and intellectual movement whose best known figures include Langston Hughes, Zora Neale Hurston, Countee Cullen, Claude McKay, and Jean Toomer.
Their work ranged from sonnets to modernist verse to jazz aesthetics and folklore, and their mission was race propaganda and pure art.
Adding to their visibility were famous jazz musicians, producers of all-black revues, and bootleggers.
Now available in paperback, this richly-illustrated book contains more than 70 black-and-white photographs and drawings.

Steven Watson clearly traces the rise and flowering of this movement, evoking its main figures as well as setting the scene–describing Harlem from the Cotton Club to its literary salons, from its white patrons like Carl van Vechten to its most famous entertainers such as Duke Ellington, Josephine Baker, Ethel Waters, Alberta Hunter, Fats Waller, Bessie Smith, and Louis Armstrong among many others.
He depicts the social life of working-class speakeasies, rent parties, gay and lesbian nightlife, as well as the celebrated parties at the twin limestone houses owned by hostess A’Lelia Walker.
This is an important history of one of America’s most influential cultural phenomenons.