En Eye on the Modern Century 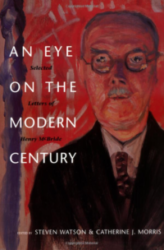 An Eye on the Modern Century

Henry McBride (1867?1962) became a towering figure in art criticism during a long career that began in 1913?the year of the famous Armory Show in New York that opened American eyes to avant-garde developments in European art?and continued until the advent of Abstract Expressionism in the late 1940s and early 1950s. A sensitive and discerning observer of the changing cultural landscape, McBride not only wrote prolifically for publication but also corresponded extensively. In this remarkable collection of selected letters, Henry McBride describes some of the most important events and figures of twentieth-century modernism. Written in a characteristically charming, gossipy, and warm-hearted style, these letters reveal McBride?s responses to revolutionary changes in the world of art and in the world at large.